In the case of rehabilitating country houses or rustic houses, it is very common to find roofs made of wood, whose beams are mere tree trunks that are usually in poor condition.

Although tree trunks as beams and support structures for houses have been used since prehistoric times, nowadays it is much safer from a technical point of view to use wooden beams made by lamination.

Glulam beams are very versatile and relatively inexpensive, and they allow the stresses to be calculated much more precisely than when using logs, which normally do not have a homogeneous internal structure and may have hidden knots and fragile points for the architect performing the stress calculations.

Glulam beams also offer a regular and symmetrical surface on which to install the various brackets and supports for the roof.

Using wood as a building material is also recommended from both an aesthetic and an ecological point of view: wood is a renewable material and generates very little waste during extraction and processing compared to other building materials such as concrete and bricks (which are made from clay).

Even at the end of its life, wood is easily recyclable, does not pollute and can be processed into other by-products.

How to repair a wooden roof

The first thing that must be done before proceeding with a repair of a wooden roof is to determine the state of deterioration of the roof.

Often, the tiles can be re-used and only the supporting structures must be replaced. In the case of very old buildings, it is very common for part of the roof or even the side walls to have collapsed due to the passage of time and lack of maintenance.

The analysis of the state of the building will allow us to determine the works that will be necessary and the size of the project itself.

Humidity: main problem of the wood 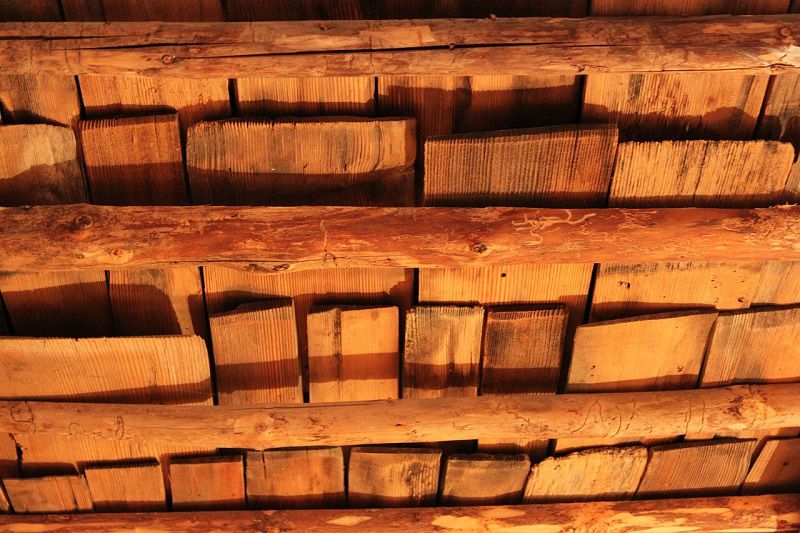 The wood deteriorates rapidly due to humidity, which can be accelerated if attacked by xylophagous insects.

Humidity due to filtration is what causes the most accelerated deterioration, although it is also common for humidity to accumulate due to condensation inside the building. The latter can be solved by designing a building body that has efficient air circulation.

Removing the tiles is the first step in restoring a wooden roof. Work should always be done from the top down, so as not to compromise the safety and structure of the building.

After dismantling the tiles is time for the laminated wood beams to be placed, making the repairs and adaptations on the side walls that support these beams. Depending on the type of project, a more or less wide span (space between beams) can be designed.

Before placing the beams, it is advisable to carry out anti-fungus and anti-woodworm treatments, in order to extend the life of the beams as much as possible.

It is usual to place longitudinal or herringbone pattern boards on top of the beams, which offer a completely wooden interior view. The insulation is placed on top of these boards and over the insultion we place the tiles again.

We evaluate your project for free: